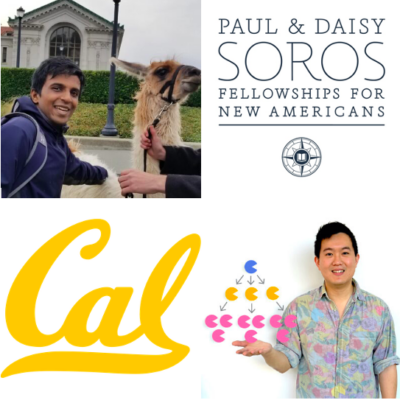 Hari Srinivasan (‘22, Psychology/Disability Studies) and Andrew Lu (‘17, MCB) have been awarded the prestigious Paul & Daisy Soros Fellowship for New Americans, a scholarship that funds graduate degrees for immigrants and children of immigrants who are “poised to make significant contributions to U.S. society, culture, or their academic field.” The selection of this year’s 30 recipients, out of a pool of 1,800 applicants, was based on merit, with an emphasis on creativity, originality, initiative, and sustained accomplishment.

Hari, a first-generation American whose parents immigrated from India, will enter Vanderbilt’s PhD program in Neuroscience in the fall as the first minimally speaking autistic to ever enroll in a doctoral program. He cites his positive and nurturing experience at UC Berkeley as a key factor in this remarkable achievement: “Usually autistics with my level of challenges are presumed to be incapable of many things, so a lot of doors are shut in our faces. We get excluded, even before we even get to decide for ourselves if something interests us or if we can think of making it work for us. So, not hearing that constant “NO” here at Cal was so refreshing to my wellbeing; it let me explore and try different things and really it was like neurotransmitters were just free flowing in this autism mind.” More generally, Hari appreciates the encouragement Cal faculty give all of their students to venture out and be part of the change they want to see in the world.

As an undergraduate at Cal, Hari maintained a 4.0 GPA while writing regular columns and articles for The Daily Californian, teaching a popular and impactful DeCal class on autism, running Team Propaganda for the makerspace Berkeley Disability Lab, serving in leadership roles in Spectrum: Autism at Cal, and, as a senior, conducting independent fully-funded research on the emotion of “awe” as a Haas Scholar. He is particularly grateful for the unwavering support for these endeavors offered by Professors Stephen Hinshaw, Karen Nakamura, and Dacher Keltner, and many others on campus. At the end of the day, Hari likes to think of everything he got to do with the opportunities Cal opened up for him as small pebbles that contribute to the ever-widening ripple in the pond of change.

Outside of Cal, Hari has been invited to join the boards of several national advocacy organizations, and was selected to serve on the NIH’s Interagency Autism Coordinating Committee, which advises federal policy on autism. His advocacy efforts were even highlighted on President Obama’s Instagram on the 30th anniversary of the Americans with Disabilities Act. His activism is not limited to disability-related issues; he took part in a climate change march at Cal with a banner in hand, a challenging feat given the sensory issues of autism.

Hari chose Vanderbilt University’s program because of the variety of autism research going on there and the potential applicability of neuroscience to everyday life, from relationships to mental health, from the mind to behavior, from the brain to the way we empathize with others, from the neuronal pathways to societal stigma. In addition to his academic studies, he will be working with the Frist Center for Autism and Innovation on issues like autism employment to continue his commitment to advocacy.

The second recipient, alum Andrew Lu, was born in Taiwan and raised from a young age in Houston, Texas. He is currently in the third year of the UCLA-Caltech Medical Scientist Training Program (MD-PhD). He is specializing in the rapidly growing field of synthetic biology, building artificial cell behaviors to better understand design principles of natural systems. He discovered and embraced his life’s work as an undergraduate at UC Berkeley, after taking a leave of absence after his sophomore year to evaluate his original plan to major in Computer Science and work in Silicon Valley. Andrew credits the number and breadth of labs at Berkeley—in particular, the labs of Professors Robert Tijian, Daniella Kaufer, and Yang Dan—for exposing him to a variety of subdisciplines and scientific approaches.

Hari and Andrew both received personal phone calls from Soros Foundation representatives to let them know they had been selected to join the 2022–2023 cohort of Soros Fellows, a moment Hari describes as “surreal.”

Cal students interested in learning more about the Soros Fellowship are encouraged to visit https://live-scholarships-4.pantheonsite.io/soros/.