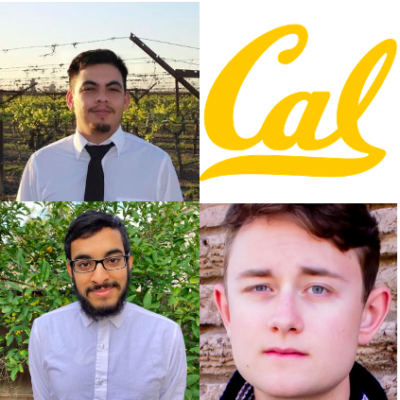 Thanks to the ingenuity and commitment of three Berkeley undergraduates, and funding support from the Donald A. Strauss Scholarship Program, two new student-initiated public service projects will be launched over the coming year.

Adil Raniwala (Political Science, ’22) and Garrett Oman (History/Public Policy, ’23) will use the $15,000 grant to set up community networks and deliver free halal food to Afghan refugees who were resettled in temporary housing in Alameda County in the wake of the U.S. military withdrawal from Afghanistan in August 2021. “Project Peacemeal” will build on the existing infrastructure and resources of local Muslim Student Associations (MSA), masjids, and halal markets to provide refugees with a much-needed, reliable source of foods deemed permissible according to Islamic law.

Garrett and Adil met through mutual online classes during the pandemic and have “never stopped talking” since then. Garrett, who is in the Army ROTC and has family members who served in Afghanistan, and Adil, who is Muslim, both felt strongly compelled to do something in response to help refugees escaping to the U.S. after the rapid fall of the Afghan government last year. They discussed public service ideas the first time they met in person and are thrilled that their project can now be realized. They are already reaching out to Berkeley’s MSA to solicit student volunteers and build up a staff for the project.

Pedro Rodriguez (Sociology, ’23) received a Strauss Scholarship to support innovative radio programming that will disseminate information about workers’ rights, immigration documentation, and environmental health and safety to farmworkers in California’s Central Valley. Pedro, who has worked alongside his parents in the fields since the age of seven and experienced exploitation and safety hazards on the job, noticed that workers don’t have time to attend informational workshops due to their long hours and family commitments. They do, however, listen to the radio all day long. He approached Radio Bilingue (KSJV 91.5) in Fresno with his idea about “suppressing disparity with information” by broadcasting interviews with lawyers, OSHA experts, and others right into the fields. The radio station agreed to partner with Pedro and even offered to train him in interviewing and marketing techniques this summer in preparation for producing the show in the fall. Pedro hopes to bring others on board by reaching out to existing Berkeley organizations such as the Public Service Center’s Alternative Breaks service-learning program to get other students involved in creating and translating content for the broadcast and help it become self-sustaining beyond the life of the current grant.

The Donald A. Strauss Scholarship Program supports self-initiated public service projects designed by juniors and seniors. Selectors look for candidates who are passionate about their project and who have a demonstrated interest in public service, outstanding leadership potential, effective communication skills, and who wish to make a difference in local, regional, or national communities. For more information about the Strauss Program, please visit https://live-scholarships-4.pantheon.berkeley.edu/strauss/.